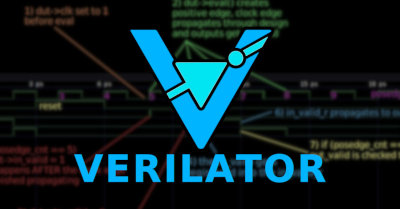 Verilator is a tool that compiles Verilog and SystemVerilog sources to highly optimized (and optionally multithreaded) cycle-accurate C++ or SystemC code. The converted modules can be instantiated and used in a C++ or a SystemC testbench, for verification and/or modelling purposes.

Verilator is essentially a Verilog/SystemVerilog simulator. It’s commercial-grade, super fast, free and open source, but it is not a direct replacement for Modelsim, Questa Sim, Synopsys VCS, Vivado Xsim, and other event-based simulators. Verilator is a cycle-based simulator, which means it does not evaluate time within a single clock cycle, and does not simulate exact circuit timing. Instead, the circuit state is typically evaluated once per clock-cycle, so any intra-period glitches cannot be observed, and timed signal delays are not supported. This has both benefits and drawbacks when comparing Verilator to other simulators.

As Verilator is cycle-based, it cannot be used for timing simulation, back-annotated netlists, asynchronous (clockless)logic, or in general any signal changes that involve the concept of time - all outputs switch instantaneously whenever the circuit is evaluated.

However, because everything between clock edges is ignored, Verilator’s simulations run extremely fast and work great for simulating the functionality of synchronous digital logic circuits with one or multiple clocks, or for creating software models from your Verilog/SystemVerilog code for use in software development.

As verilator is cycle-based, it cannot fully support the IEEE Verilog and SystemVerilog standards. But don’t worry, synthesis tools are typically not fully compliant either.

Consequently, Verilator is very strict regarding the Verilog/SystemVerilog code you give it. Besides not supporting any time delays, it will also not accept most non-synthesizeable code*, so (typically) you cannot just take your SystemVerilog testbench and build it using Verilator without some significant modifications. You will get to know if Verilator doesn’t support your code quickly, as it will bombard you with heaps of warnings and error messages.

Because Verilator does not support unsynthesizeable code, there is the unexpected benefit of it being closer to the behavior of synthesis tools when compared to other simulators. It will force you to write better code for synthesis, potentially reducing the amount of problems you face later in the development process.

* with the exception of things like $display(), $finish(), $fatal(), some versions of $assert, and others.

Verilator is open-source and free both as in free beer and free speech. To simulate a design using Verilator, a native binary executable is built from the verilated HDL code and the C++ testbench using GCC and Make. As the entire toolchain is free, there are no limitations on how many instances you can run or how many users can use it. Due to Verilator’s speed, simulations for even more complex designs complete quickly on older machines and laptops, thus you’re not required to purchase expensive computing hardware. Great for students!

Don’t let the price fool you, though. Verilator has a wide range of commercial users too: 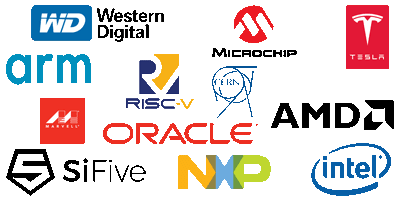 This guide is written for someone that primarily knows Verilog/Systemverilog and a bit of C/C++, but has never used Verilator.

I will assume you are using some form of Linux on your system, and have Verilator, GTKWave, Make, and GCC installed on said system.

You can get the finished sources for the example Verilator project used in this tutorial from Github and explore as you wish:

Or, follow the guide below as we set up everything from scratch.

To check out how Verilator works, we need some kind of DUT (device under test). I wrote a basic ALU in SystemVerilog that we will verify in this multi-part tutorial series, the source of which is provided below:

To follow this guide, create a new work directory, and save the ALU source as alu.sv.

As you can see, this ALU is very simple. It has two register stages, no stalling, and supports only two operations: addition and subtraction. Here is an example waveform of how we expect the ALU to behave:

From Figure 2, you can see that in the first stage, the input signals are registered, and in the second stage, the combinatorial result is registered into the outputs. With this in mind, lets now take a look at the steps needed to build a basic testbench.

The --cc parameter here tells Verilator to convert to C++. Verilator also supports conversion to SystemC, which can be done by using --sc, but we will not be using this functionality for now.

Running the above command generates a new folder named obj_dir in our work directory. This is where all of our converted sources went:

The generated .mk files will be used with Make to build our simulation executable, while the .h and .cpp files contain our C++ headers and implementation sources, resulting from the SystemVerilog conversion. I suggest you to explore for a bit and see if you can figure out what is where.

The two files we’re most interested right now are Valu.h and Valu___024unit.h:

Now that we have our DUT converted to C++, we can start writing our testbench. Our testbench will be in a new file named tb_alu.cpp. Let’s start by exploring a minimal C++ testbench code example:

The first few lines with the include statements are mostly self explanatory. We need to include <verilated.h> and <verilated_vcd_c.h> that come with the Verilator installation to access common Verilator routines and write waveforms to a VCD (value change dump) file.

As described previously, "Valu.h" contains the top class of our Verilated ALU module, and "Valu___024unit.h" contains a Verilated version of our typedef enumeration.

Next up, we’ve got the following two lines:

We’ll use the sim_time variable to track when to finish the simulation. There are more ways to end a simulation, but for now, we’ll simply quit once we’ve simulated 20 clock edges.

Then we’ve got the following mess of a main function, which will look peculiar if you’ve not written a C++ testbench before:

The line Valu *dut = new Valu; instantiates our converted ALU module. In SystemVerilog, this would roughly equate to alu dut (.*);.

The next four lines set up the waveform dumping. Notably, we create an m_trace object and pass it on to our dut in the line dut->trace(m_trace, 5);. The parameter 5 simply limits the depth of the trace to 5 levels down the device under test.

Lastly, we’ve got the stuff that makes the simulation happen:

During each iteration of the while loop, the line dut->clk ^= 1; inverts the ALU clock (This will create the rising/falling edges on the clock). This will be the one and only clock we’ll be using in our testbench.

The call dut->eval(); evaluates all the signals in our ALU module, and m_trace->dump(sim_time); writes all the traced signal values into our waveform dump file. As you can see, the model is currently only evaluated at the clock edges.

The simulation time is then incremented and the loop continues until it reaches MAX_SIM_TIME. Note that this is not actually a time value - the variable simply keeps track of how many times we’ve inverted the clock.

As you can see, this testbench doesn’t do much else besides clocking the design, but it’s a good starting point to build upon.

Now that we have our testbench written, we need to build an executable to run the simulation.

Unlike some other simulators, for example Modelsim, in which you either open the sources in the graphical interface or pass them to the Modelsim executable, the Verilator application is not used to simulate the testbench.

Instead, the Verilator application is only used for converting Verilog to C++ and create build instructions for Make. The simulator in this case is the C++ testbench itself.

The testbench and the converted HDL sources are essentially a C++ application, which that gets built and run on your computer. Running the compiled executable is what simulates your design, and the GNU Compiler Collection (GCC) is the primary choice for building Verilator executables.

To build the simulation executable, we need to run Verilator again to regenerate the .mk files to include the C++ testbench - this is done using --exe tb_alu.cpp:

To build our executable we do the following:

-C obj_dir tells make to work in the obj_dir directory. We then pass the required makefile using -f Valu.mk. Lastly, we tell make to build the target Valu, which is the name of the compiled testbench executable.

If the testbench executable was built successfully, you will find a Valu binary in obj_dir.

Once built, simply run the Valu binary to run the simulation:

At a glance, it doesn’t look like it did much. After all, we do not have any print statements in our testbench code, so it’s expected. However, running the simulation resulted in a waveform file named waveform.vcd being generated in our work directory.

You will then be presented with a GTKWave window that looks like this: 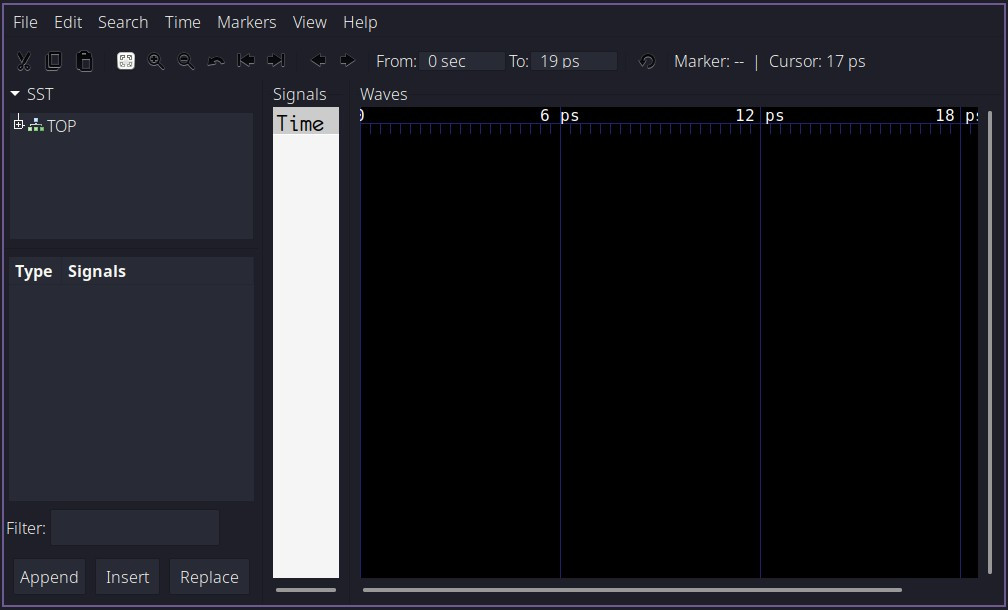 Follow the steps shown here to load the signals from DUT and view their waveforms: 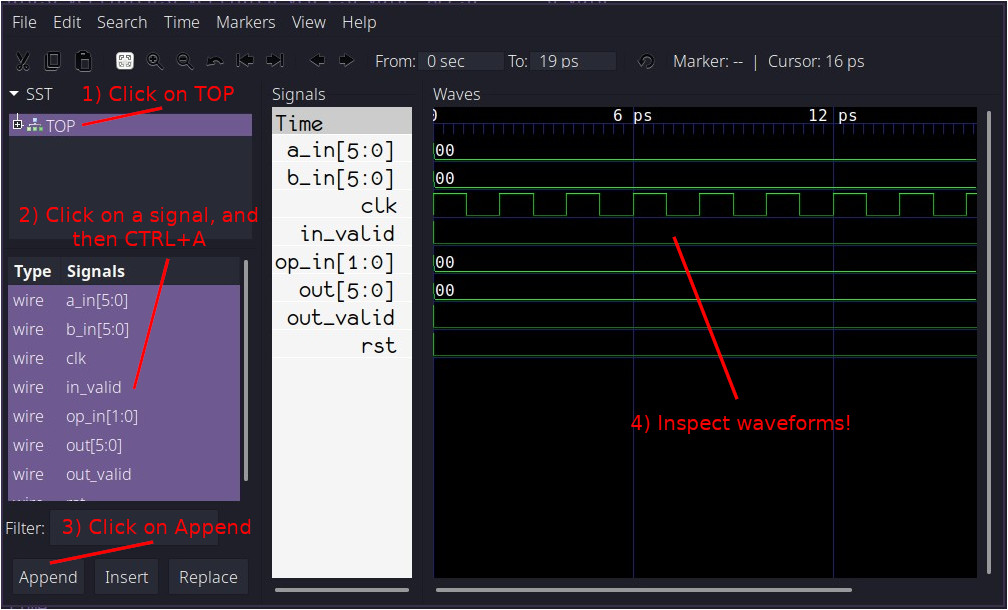 Firstly, you may have noticed that our simulation does not have any ‘x’, or unknown values. This is because Verilator is a two state simulator, and by default, all signals are initialized to 0. Great for speed, as 2 states is less than 4, but not great if we want to check how well our reset logic works. We will explore this more later.

Secondly, half of a clock cycle takes up 1ps. This is the default timescale for Verilator, and in this specific case it does not signify any particular value of time.

After reading this guide, you now hopefully have some basic understanding about how Verilator works. As you can see though, we’ve barely touched the surface, so please continue on to Part 2, where we will implement some basic verification funtionality into our C++ testbench.

If you have any questions or observations regarding this guide ⌗

Feel free to add me on my LinkedIn, I’d be happy to connect!

Or send me an email: